Feeling Meat and Fire: A Ukrainian Who Makes Texas BBQ

14:06 21 July 2021
Tweet
733 0
Especially in the pandemic year, enterprising Ukrainians launched delivery-only companies accessible mainly via instagram. One of these is KlubDymu, «cloud of smoke,» serving Texas-style barbecue. An American barbecue aficionado reports on the experience. 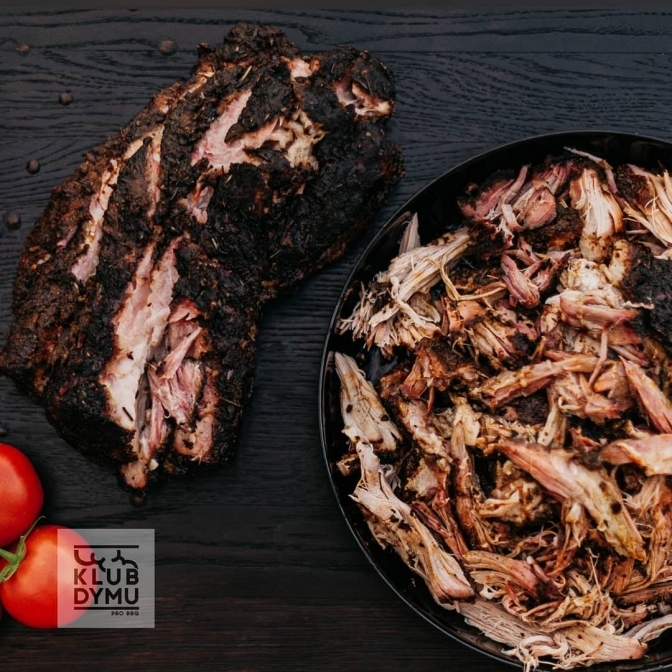 I grew up in North Carolina, I have lived in Texas, and I have family from Kansas City – all three of which take barbecue seriously, in quite different ways (see end of the story for an American barbecue guide). In Ukraine, I’m perfectly happy enjoying a good шашлик (shashlik) – pork cooked over open flames – in the Carpathians or in a forest near Lviv, but I am reluctant to embrace American-style barbecue anywhere outside of America. I won’t eat North Carolina-style barbecue in Texas, or Texan barbecue in North Carolina, let alone in Mukachevo, Ukraine.

Then one day last fall I was visiting My Wine natural wine shop in Lviv when my friend Nicholas Shandra, the owner, offered me some food he had spread on the tasting table. I tasted it – and could not believe it. I tried again. Yes, it was real Texas barbecue: dry-rubbed juicy, tender ribs. Shandra had ordered this food from a pandemic era local start-up, KlubDymu, which is Ukrainian for «cloud of smoke.»

KlubDymu has no storefront; you can only reach them via Instagram. I ordered several more times with Ukrainians and Americans alike–and then I caught up with its founder and chef, Dmytro Sadontsev, to see how and why he mastered the high art of Texas barbecue from his home and barbecue pit on in the city of Lviv. 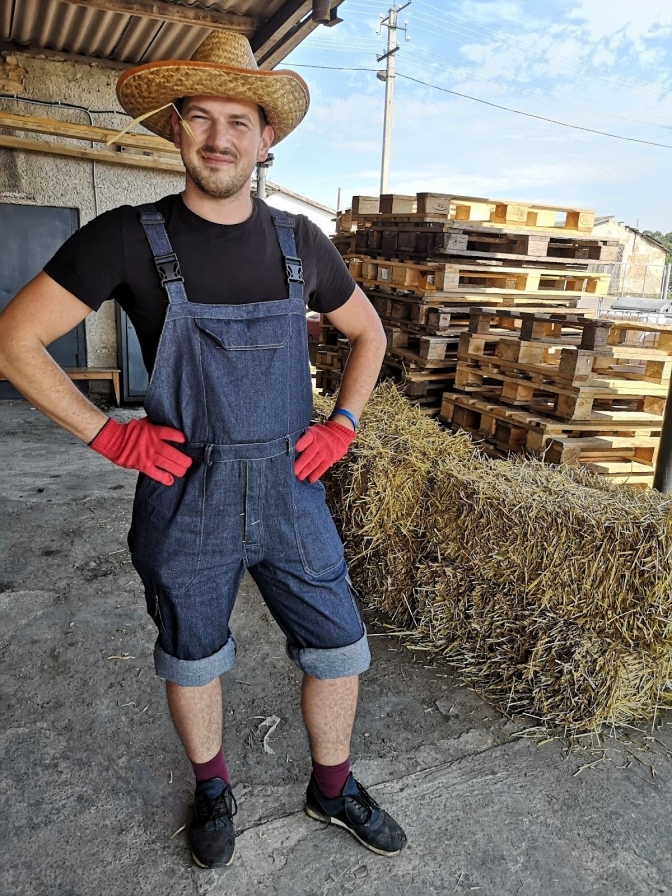 «Ukraine people don’t know what is real BBQ,» Dmytro Sadontsev writes me. «They think it is ‘shashlik’ or sausages or a burger cooked on fire, but real BBQ is so much a different and deeper concept, so I decided to try to let them know).»

[The closed parenthesis –») «– is widely used on its own as a smiley face emoji in Ukraine.]

Dmytro learned, first, by watching YouTube videos of Austin, Texas, barbecue legend Aaron Franklin. People will wait hours – or, sometimes, hire someone to wait for them – in order to order some luscious brisket and smoked meat from Franklin’s barbecue, just outside of downtown Austin.

Four years ago, Dmytro cooked his first brisket, in a gas oven – something he laughs at now that he has learned how to smoke it, thanks to Mr. Franklin.

«I’m tired of «industrial’ meat, with nitrates, flavor enhancers and other [garbage],» Dmytro says. «I want to eat just meat and then lick my fingers after)!.» 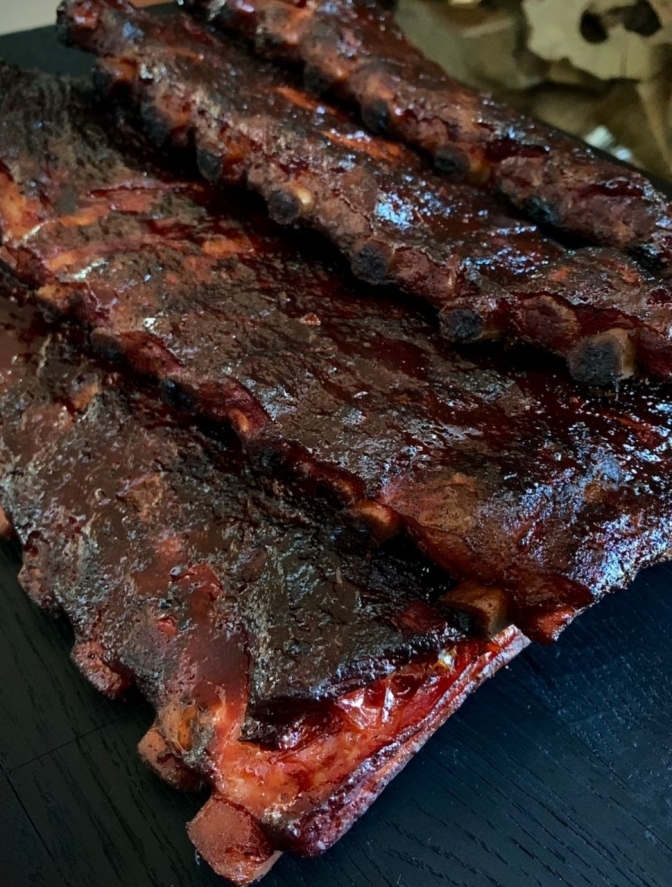 Before making barbecue, he was – as he continues to do – bottling sunflower oil, sunflowers being aplenty in Ukraine.

«I dreamed about good brisket for a long time, not to eat, but to cook … and it was not an idea about business, but...everything can change. From idea of business to business – 3 months,» he says: all during the pandemic. He began operating in July 2020.

Although Aaron Franklin, through YouTube, inspired Dmytro and taught him the essentials, the Ukrainian is developing his own feel for barbecue.

«I don’t know what style I learned,» he says. «I just try to cook good BBQ. And I don’t like everything Aaron does, for example his rubs for pork, but I like so much how he cooks, how he feels meat and fire. And he is just the best – everyday line of people to his BBQ point is good proof).»

Dmytro hopes someday to have a barbecue restaurant, a smoker on wheels for catering, and also to ship all over Ukraine. He’s never been to the USA, but he says he feels like maybe he is reincarnated from there, given his barbecue soul.

From Klub Dymu, you can order beef brisket, ribs, turkey, pickled onions – and, well, just write to Dmytro Sadontsev on Instagram and see what he has been cooking.

Austin and Lviv share a connection in that global tech firm Softserv is co-headquartered in both cities. And maybe now any visiting Texans can feel a little bit at home in Ukrainian Galicia – enjoying Texas barbecue. If you try it, please write us and share your thoughts.

→ Central Texas: salt and pepper dry rub, sometimes with other ingredients, sometimes with a sauce; meat of whatever kind is slow-smoked indirectly over mesquite, pecan or oak chips; sides often include white bread; sausage is also common; beef and pork, brisket and ribs most common formats

→ East Texas: slow-cooked, maybe longer than in Central Texas, over hickory wood chips; marinated in sweet tomato sauce; could be beef or pork; if pulled, it will be on a sandwich

Slow-smoked meat--could be pork, chicken, turkey, sausage, but beef brisket is the standard; burnt ends, the fatty tips of beef brisket, are popular; dry-rubbed with spices and served with a lot of thick tomatoey sauce, either sweet or spicy

→ North Carolina – Eastern: the whole pig is slow-smoked in a pit, sometimes in the ground, with oak or hickey wood chips. There’s sauce--they hate it when people call it such – but rather a baste of vinegar and pepper: no tomato! Served with mayonnaise-laden cole slaw and a cornmeal delicacy called hushpuppies, along with beans, okra, and macaroni and cheese, and other sides, called fixin’s. Served pulled.

→ North Carolina – Western/Lexington: pork shoulder, slow-smoked in a pit with oak or hickory wood chips, with a red baste of vinegar, tomatoes, and red pepper flakes; this sauce is also used in the cole slaw (cabbage salad); served with the hushpuppies and many other fixings. Served pulled, mixed often with the slaw.

The whole pig is slow-smoked, and served with a mustard sauce

Slow-cooked pork in a pit with a dry rub with many spices. Some dispute how unique Memphis is vis-à-vis the other traditions.)