In Ukraine-Russia Tension, the Real Debate is About Free Society, Not the Bones of a Dead Prince

20:54 03 January 2022
Tweet
631 0
Attempting to erase Ukraine, Russia’s President Putin looks to ancient history. Ukrainians seek no such quibbling ancient justification for their existence. They have another raison d’etre, one they risked their lives for: Freedom, with self-determination. 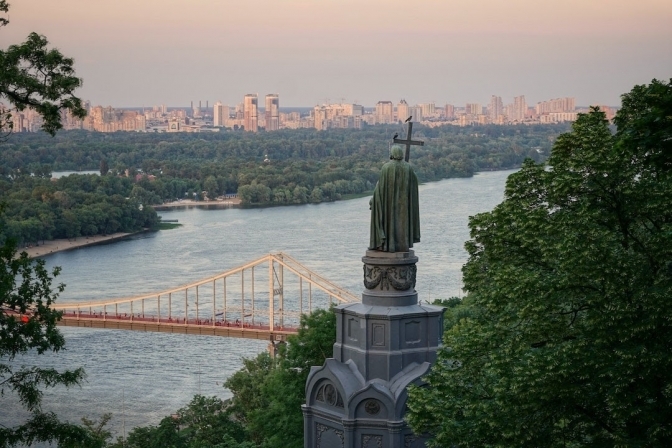 The statue of St. Volodymyr, Grand Prince of Kyiv who brought Christianity to the Kievan Rus people and father of Yaroslav the Wise, overlooks Kyiv’s Dnipro River.

LVIV, UKRAINE, 3 January – The cobbled lanes of this western Ukrainian city teem with people enjoying the festivities of the season, with eastern-calendar Christmas still days away. There’s no mood here of a nation facing imminent Russian threats. And as the sound of Ukrainian-language songs fills the squares, there’s no doubt about the independence of Ukrainian culture, as its own thing.

But in global headlines it would seem that all of Ukraine is in an existential panic. A 1 January Wall Street Journal story is the latest in a series of accounts about how a new Russian threat to Ukraine is imminent. According to the story, officials in Kyiv are feverishly looking for the bones of a medieval saint in order to justify Ukraine’s existence before Russia invades.

«​​Finding [the bones of Prince Yaroslav the Wise, who appears on both Russian and Ukrainian banknotes] would be a notable if symbolic victory, bolstering Ukraine’s case for sovereignty at a moment of significant tension with its neighbor,» writes reporter Brett Forrest. «​​[For Putin] Russia and Ukraine are ‘one historical and spiritual space’» as he put it in a July essay.»

Sure, Russian president Vladimir Putin might indeed want to occupy Kyiv for these emotional reasons. Ukraine’s capital, is 600 years older than Moscow, and its St. Sophia’s cathedral is more central to Slavic spirituality than the Kremlin’s St. Basil’s. Kyiv is where Yaroslav consolidated the Kievan Rus empire.

But Ukrainians, as is clear from nearly every conversation I have here, seek no such quibbling ancient justification for their existence. They have another raison d’etre, one they risked their lives for: Freedom, with self-determination. 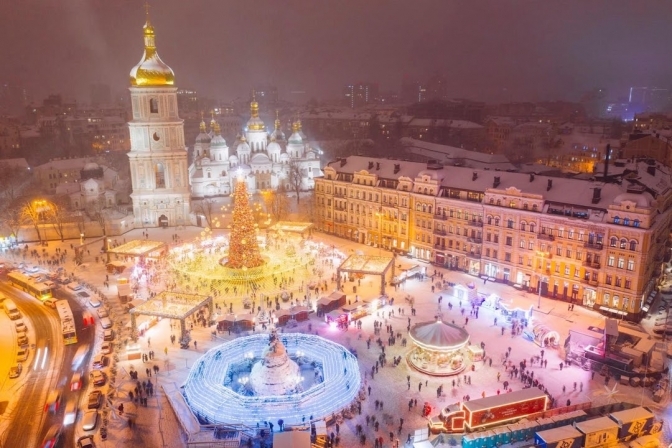 St. Sophia Cathedral in Kyiv, its design inspired by the construction of Hagia Sophia in what was then Constantinople, towers over a Christmas fair in the Ukrainian capital.

In the winter of 2013-14, the people stood in the streets for months to oust the pro-Moscow regime. In what is now called Euromaidan or the Revolution of Dignity, Putin’s puppet regime fled to Russia, and the people won. Now the situation is simple «They are free, and they’d like to keep it that way.

Yaroslav Hrytsak, a historian at Lviv’s Ukrainian Catholic University, argues that Ukraine, unlike Russia, is a political tradition, more so than a language or a culture or even a storied history.

«Words about the eternal Ukrainian people, [our] nightingale language, and [our] melodious singing are a set of beautiful phrases that mean little,» he writes in a new Ukrainian-language book.

«The cardinal difference [between Russia and Ukraine] is not in language and religion – here we are quite similar,» Yaroslav told Lviv Now in Septembe 2021.

Why? Because In Russia «the state is everything,» whereas Ukraine’s strength is its civil society, or self-organizing people.

Lviv’s Ukrainian Catholic University and its efforts to carry on the legacy of the Revolution of Dignity were featured in this 2018 NBC television spot during a Notre Dame-Michigan football game: «Fighting for Freedom of Thought.»

«In 2014 [at Euromaidan] we literally won,» Serhii Pukhov, a software engineer and punk rocker in Kyiv told me in December. «When needed, we stand for ourselves.»

And Ukrainian people tend to stand with others. I had interviewed Pukhov because his band, Dity Inzherneriv («Children of Engineers») released a song protesting Beijing’s treatment of Hong Kong and the Uyghur people. And I had heard about Pukhov through Arthur Kharytonov, the founder of the Free Hong Kong Center in Kyiv: all signs that young Ukrainians are committed to staying free and helping others resist tyranny, certainly not something possible if Moscow were in charge.

Pukhov describes the 2014 revolution as a «moment of power»: The people peacefully succeeded, the pro-Moscow regime fled to Russia. Alas, as he noted, the people of Belarus and Hong Kong tried but have been unable to achieve this.

And that Ukrainian success–not the whereabouts of the bones of Yaroslav the wise–is what scares Russia.

Annoyed by Moscow, Ukrainians rediscover their language and culture 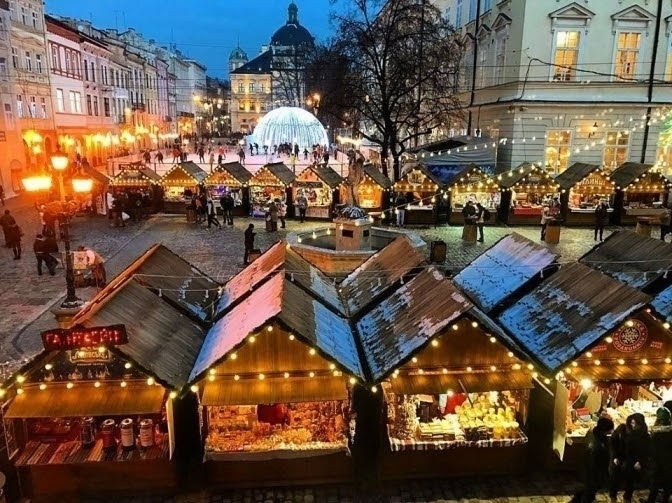 In the wild days after the Revolution of Dignity, Moscow made a move to take Ukrainian territory. Putin succeeded in overtly occupying the Crimean peninsula and also in backing pro-Russia rebels in the eastern Donbas region. Although bands of armed citizens protected cities like Odesa, Donbas remains a war-torn region with Russian weapons occasionally killing Ukrainian soldiers.

That aggression, perhaps more than anything, has encouraged Ukrainians of all ages to shift away from any vestiges of Russian culture.

Pukhov, the punk rocker, is one of a growing number of young Ukrainians from the eastern half of the country who, rejecting the Russian language of their childhood, now, as often as possible, only speak Ukrainian. Although Ukrainian uses the cyrllic alphabet like Russian, it is more melodic and shares more words in common with Polish.

Yakiv Tsvietinskyi, a jazz trumpeter from the eastern city of Dnipro also made the switch, and so did his mother, who was born in Russia.

«As soon as the war started [when Russia first invaded in 2014] my mother switched to Ukrainian.» Her reasoning, according to Yakiv: «f a common language is Putin’s «reason for invasion of a neighboring country, she said she will do her best to remove this reason, eliminate it.»

Read more: ‘The Courage to Fail and Keep Searching’: Ukrainian Jazz Musician on the Challenges of the Creative Life

Still, in Kyiv and in the east, the Russian language is popular. In the pedestrian squares and streets of Lviv during these weeks of holidays, where it’s almost a Mardi Gras like atmosphere, I often hear among the tourists the Russian «spasibo» instead of the Ukrainian «dyakuyu» for thank you.

And yet these Russian-speaking Ukrainians still come to Lviv to get their fill of culture: the music, the cuisine, and even Christmas itself. Under Soviet times, Moscow tried to shift emphasis to New Year’s. But those attempts never worked here in Western Ukraine.

Others have come to Lviv as well: The city has lately been a center of refuge for Belarusian political activists. In 2021, a group of musicians – Americans from Ohio and Ukrainians–partnered in Lviv with escaped Belarusians to make Slavalachia, a «folk alliance» against tyrannical regimes. These things do not happen in Moscow.

There’s also been a trickle of exiles from Western Europe and the United States, because the atmosphere even amid coronavirus concerns is freer, as American Lauren Spohn, a Rhodes Scholar, writes in her essay, «Midnight in Lviv: The Story of Ukraine’s American Exiles.» People here find ways to survive and thrive.

What Ukraine can offer the world 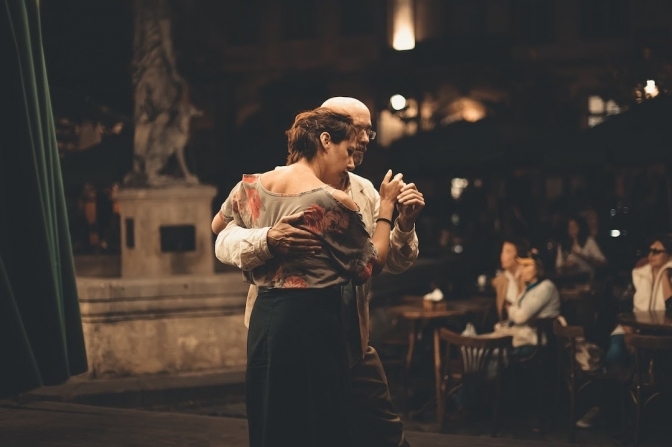 Not only punk rockers like Pukhov but also high-level European officials believe Ukraine, so often cast in the media as the «beleaguered Chornobyl country,» has things to teach the world.

Unlike in France, Italy, or Australia, say, the government knew it could not lock people in their homes during a lockdown. The power of the revolution gives the people a veto. But there’s something more, according to Steen Nørlov, a Dane who leads the Council of Europe’s Kyiv office.

«The drive for reforms [in Ukraine] is a great ambition that I think many other countries could learn from,» he told Lviv Now last summer.  Ukraine, with its people’s «ability to mobilize [has] reminded everyone what can happen if you don’t listen to the society.»

To Ukrainians, it doesn’t seem matter to Ukrainians if Prince Yaroslav’s bones are here or there. What matters is they won their freedom, by peacefully standing in Kyiv’s main square in 2014, enduring bullets from the secret police. They achieved a victory and, despite the difficult work of democracy, now have freedom.

This is why free Ukraine is dangerous to Russia, just as a free Taiwan is a mockery to tyrannical Beijing. The people won.

«Many Ukrainians are like us, sitting here right now in our kitchens, drinking our Calvados or whatever we have made, and we are ready,» a friend who participated in the 2014 revolution as a student leader told me recently. «If anything happens we will be ready.»