21:12 06 October 2021
Tweet
917 0
«Never in the history of Lviv have there been such jam sessions with such an amount of great musicians playing for so many hours, for so many days, with such crowds.» 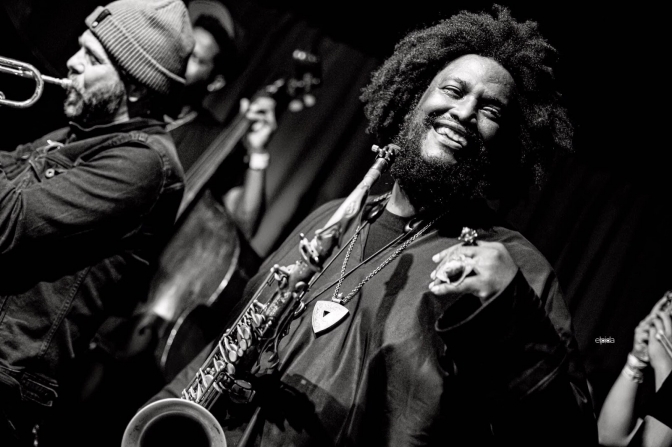 Kamasi Washington at the LV Café (photo by Elpida)

«Look at his eyes, he’s not playing music, he is drawing fire from somewhere above.»

Kamasi Washington at the LV Café (photo by Elpida)

At four-something-o’clock in the morning on a June Saturday, American jazz legend Kamasi Washington walked into Lviv’s LV Café. The celebratory festival weekend jam session had already been going strong, but Kamasi’s presence brought a new electricity. Here was the guy who would play the main stage of Leopolis Jazz Fest the next day – coming to play with the local Ukrainian musicians until dawn.

At first Washington observed from a back corner table, but then saxophone in hand he calmly walked to the stage. The biggest crowd maybe the place had ever seen took to their feet and entered a time-stoppage. In the Instagram age, few were filming; most were living. The local Lviv jazz guys were suddenly playing with one of the world’s best. The patrons were gathered rapt like people around a campfire storyteller.

The Leopolis Jazz Fest, the ticketed affair at Bohdan Khmelnytsky park, back to life after the 2020 absence, had made these moments possible with a stellar lineup of headliners: the sine qua non classic jazz of Wynton Marsalis and his Lincoln Center jazz Orchestra; the cool-clear jazz of Israeli legend Avishai Cohen; the vibrant piano-playing of Denmark’s Katherine Windfield; and the energetic, soulful singing of the UK’s Seal. Then there was the party-atmosphere of Ukraine’s Pianoboy, joined by 2016 Eurovision winner Jamala; the famed trumpeting of Chris Botti, and Washington’s mystical-soulful jazz.

Lviv, its musicians, and clubs – ready for the moment – seized the opportunity to open the heart of the city to global greats. Every night of the Jazz Fest, late night jams continued around town at the Grand Hotel, Dzyga, Mad, Pravda Beer Theatre – and most especially at LV Café, where for five nights in a row the music rolled on until 6am or later.

«I think that in Ukraine there is already our own Smalls and it’s in Lviv: Yurii Sadovyi’s LV Cafe,» wrote Anastasia Litvinyuk, pianist and co-founder of popular Lviv-based band Shockolad, on Facebook after one of the all-night jams. She was referring to the legendary New York City jazz spot.

«The great stars treated the young as equals,» said Elpida, a photographer and linguistics professor at Ukrainian Catholic University and also the wife of Arnautov, leader of the LV Cafe’s weekly jams.

Caught up in the moment, the American musicians in particular seemed grateful to play before an audience with less Covid angst. And having missed live music for so long, the musicians jammed until the earth turned.

When Kamasi and Ukrainian musicians and fans alike walked out of the underground club into the stone Kryva Lypa («Winding Linden») passage, the midsummer sun was rising. 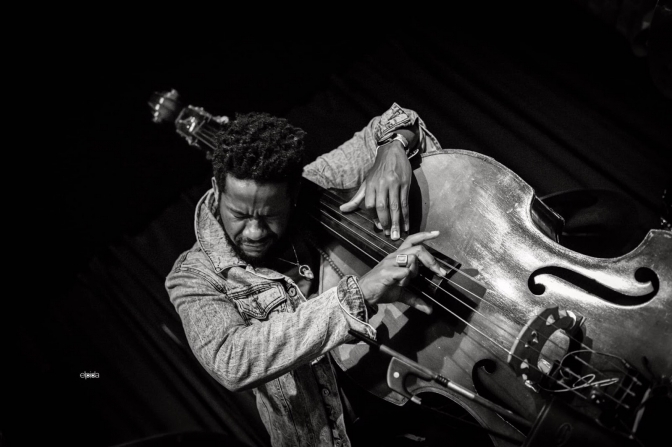 Just a few hours after we emerged from LV Café, I talked with Washington at the backstage trailers before his Sunday night show at the «main stage dedicated to Eddie Rosner.» He hadn’t played a gig in front of an audience in more than a year.

«I got to get my soul back for the first time in so long,» Washington said. «So really last night [at the LV Café] was my first night back playing music with other people. It’s such a huge part of my life... It felt great last night being able to play and be free.»

To be free: that had become a theme of Jazz Fest and the jam sessions. Introducing American legend Marsalis, a U.S. embassy official had recalled Marsalis’s reflections on how jazz is a metaphor for democracy, something that resonates in Ukraine where only seven years ago the people took back their democracy in the Euromaidan Revolution.

And to mark the Leopolis Jazz Fest, Tvoe Misto (publisher of this website) had printed a special broadsheet newspaper, jazz edition, distributed around town, with the banner headline: «The music of free people.»

Those words--»the music of free people» – had come from Yurii Sadovyi, owner of the LV Café, who in the depths of the pandemic strove to keep his jazz club alive, giving local musicians a space to rehearse, record, jam, improve, and play together. They were ready for the arrival of the legends.

Every day, between shows at the free – access Rynok Square stage and the main stage on the festival grounds, I went Fatzet (Фацет), a Virmenska (Armenian Street) café popular with musicians, to see what people were feeling. Especially in that glorious middle of the fest when it seems it might never end, people were making sense of how the music had affected them. The most popular sentiments were reserved for Kamasi.

‘I was listening to his concert and crying, said Lviv saxophonist, Andrii Dulysh, during one of the jams at LV Café.

See also: «Defining the Lviv vibe: The story of a saxophonist who impressed the audience with a wild solo»

«Kamasi is the Pink Floyd of jazz,» said Halyna Mamchuk. «He’s not from the earth. He exists on so many levels: Look at his eyes, he’s not playing music, he is drawing fire from somewhere above.»

Walking back from the shop a few days after the Fest, I saw an acquaintance, a Ukrainian-American doctor. «Oh, wow, that woman singing with Kamasi, what a voice, how many voices could contend in such a beautiful way with the power of his saxophone?»

She was speaking of Patrice Quinn, who among other things, mesmerized the crowd with the recently-released «Sun-Kissed Child,» which Washington wrote in tribute to his recently-born daughter.

Monday night, trumpeter and band leader Wynton Marsalis, from the legendary New Orleans musical family, and his team of more than a dozen besuited musicians, closed out the fest with the pure clear sound of jazz excellence. Two thousand people, sitting in a tent with trees creating a garden-like atmosphere sat enthralled to Sonny Rollins’s Freedom Suite and other symphonic-jazz pieces. Near the end, Marsalis said it was time to play «one of the most important forms in the universe--the blues.»

Dressing well for jazz fest is a Leopolis norm and on this national holiday, Constitution Day, Ukrainians, may clad in traditional, colorful vyshyvanka shirts and dresses, danced their way through the blues out of their seats and toward the stage as the Lincoln Center jazzmen gave them one final flourish before bowing from the waist to a grateful audience.

Back at LV Café that night, everyone was exhausted: the bartenders, waiters, and waitresses spun out cocktails, beers, wine, often for guests and musicians who were tired but not ready to let the moment go. Around 5am, the last jazz cats, keeping the festival alive, stumbled merrily through Kyrva Lypa to find some late night food.

For five days in a row, this had become a familiar scene: walking out into the midsummer morning light, with a maze of melodies in the mind. The whole city had been like a music box.

«Oh man it’s such a cool city, so much good energy and creativity. It’s an older city so you can feel the vibes,» Kamasi Washington, one who knows how to find the vibes, told me.

And at the end of his show, he said to the whole Leopolis Jazz Fest and all of Lviv:

«You brought us back to the world of making music and we love you for this.»