21:30 07 December 2021
Tweet
1674 0
Eric Wortham II came to Lviv for the Leopolis Jazz Fest in June 2021. He liked the city so much he stayed awhile to jam with and mentor local musicians. Now, he features prominently in a new video–with more than 26 million views – from global star Adele. 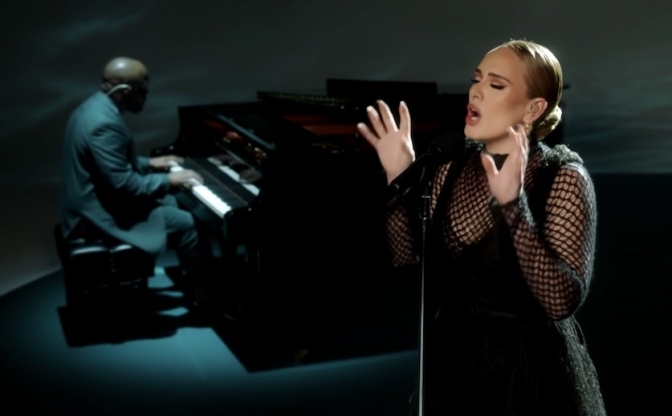 A video of Adele singing her new release «Easy on Me» at the annual French NRJ Music Awards begins with a close-up of pianist Eric Wortham II before panning over to the global star, who has just released her fourth studio album. Wortham, of Philadelphia, USA, is a familiar face to many of Lviv’s musicians.

Wortham came to Lviv in late June 2021 for the Leopolis Jazz Fest, as music director for a fest headliner, the British singer-songwriter Seal. Along with many other musicians in town, including renowned American saxophonist Kamasi Washington, Wortham went to the city’s LV Café jazz club for late night jams – sometime ‘til dawn – during the festival’s four days.

Captivated by the spirit of the city, he stuck around. Throughout the summer, he would stop by the LV Café, sometimes to listen, sometimes to hop on the keys and play with the city’s regular cast of jazz players. In conversations during that time, he told me he saw something special in this city.

«Appreciation for the art was at an all time high [in Lviv], as high as any other place I’ve been around the world,» Wortham told Lviv Now in July. «There’s an energy of family and community. There was no jealousy, but a lot of support and camaraderie, which is the breeding ground for any type of artistic explosion. A great deal of selflessness.» 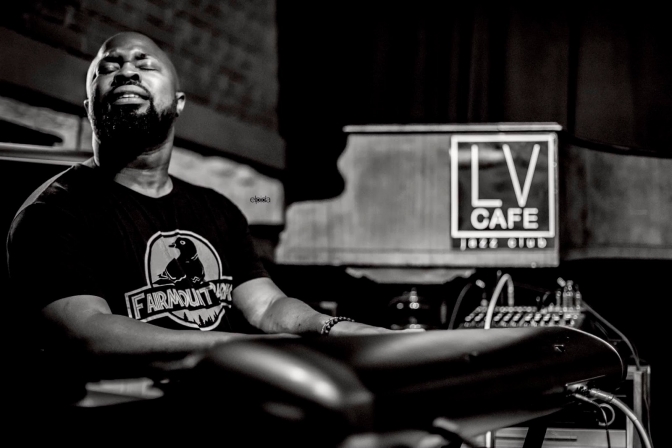 Eric Wortham II plays the keys at the LV Café. His shirt says «Fairmount Park,» which, incidentally is the Ukrainian neighborhood of Philadelphia, Pennsylvania, USA. Photo by Elpida.

He left an impression on the city’s musicians, especially the young ones, who knew that Wortham had frequently toured with Adele. Bohdan Mukomela, a drummer then aged 24, played a gig with Wotham at LV Café..

«Thanks to Eric’s great patience to mentor us, I learned to pay more attention to what’s happening right now on the stage,» Mukomela said. «And think more about what I can play or do to make the band sound better, and for people to feel happy and joyful about our musical performance. Because in the end of the day we all want to be fulfilled with love and good vibes and art is the best tool to spread it.» The journalists of Tvoe Misto («Your City») and Lviv Now produced a special bilingual edition print newspaper for the Leopolis Jazz Fest, with the banner headline: «The Music of Free People,» celebrating the Ukrainian spirit.

How Global Talent Gave Power to a Lviv Music Club

«Last summer when we were all fascinated by the incredibly stormy atmosphere at our club,» Sadovyi said referring to the frequent all-night jam sessions. «Suddenly, amid the wild, loud drive and the vibe, I heard a piano melody as light as a forest stream. It was played by Eric: He surprised us with his play, and, in time, closer acquaintance with him revealed his intelligent nature and extraordinary friendliness.»

At the time, most such festivals and clubs around the world – even the famous New Orleans Jazz and Heritage Fest – had been suspended live music due to the pandemic, so Lviv, where music flourished on the streets, in the clubs, and at festival grounds, was in a special musical moment.

«Like we saw last night at the jam session [at the LV Café], when you’re playing music even with people that don’t speak the same language, now we have a connection,» Kamasi Washington told me. «In Lviv, I got to get my soul back for the first time in so long,» Washington said. «So really last night [at the LV Café] was my first night back playing music with other people. It’s such a huge part of my life... It felt great last night being able to play and be free.»

The presence of these musicians elevated the stature of the café, only several years old.

«I think that in Ukraine there is already our own Smalls and it’s in Lviv: Yurii Sadovyi’s LV Cafe,» wrote Anastasia Litvinyuk, pianist and co-founder of popular Lviv-based band Shockolad, on Facebook after one of the all-night jams. She was referring to the legendary New York City jazz spot.

Throughout the pandemic, when rules allow, LV has been the place for jazz in Lviv, with its centerpiece Wednesday night jam sessions. You can read more about the LV Café here: «The Music of Free People.»

Adele – Adele Laurie Blue Adkins MBE – released her fourth studio album, 30, in October 2021. She’s won 15 Grammy Awards, plus an Academy Award (for her James Bond theme song, «Skyfall,» and a Golden Globe. You can learn more via her website.

You can see the weekly Live Music List for Lviv here. The LV Café is located here.