Lviv Moves the Citywide Consecration of Epiphany Water to 19 January

16:31 18 January 2022
Tweet
302 0
To avoid crowds, the fathers will hold a consecration ceremony on the morning of 19 January, instead of on the traditional 18 January Epiphany holiday, the 12th day of Christmas according to the Julian calendar. Tvoe Misto-Lviv Now will broadcast it on its resources. 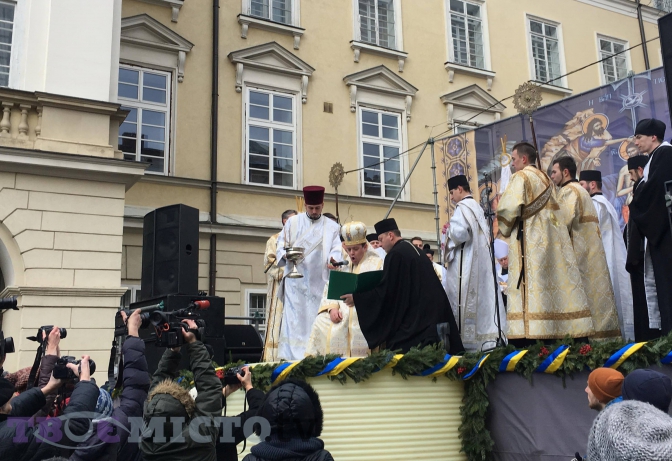 In Lviv, the traditional city-wide consecration of water for Epiphany was cancelled. This is due to the increasing incidence of Covid-19. To avoid crowds, the fathers will hold a consecration ceremony on the morning 19 January. Anyone can come to the Market Square during the day and collect holy water from the tank in front of the white tower of City Hall. This was reported in the press service of the Lviv City Council.

«We are witnessing that a new tsunami of this pandemic viral infection is increasingly affecting Ukraine and, in particular, our city of Lviv. But we understand that the feast of the Epiphany will take place, services will be held in temples.

I understand that many of us will need to draw consecrated Jordanian water. I think it can be done – the temples are open all day. Water near the City Council will also be consecrated. In this way, you can come to your senses in peace and, maintaining a social distance, adhering to all the requirements, get water,» – Fr. Pavlo Drozdiak, the chaplain of the Lviv City Council, said.

This year, the consecration ceremony will be presided over by the Bishop of the Ukrainian Diocese of the Armenian Apostolic Church Markos Hovhannisyan. Lviv residents will be able to collect consecrated water from 11:00 during the day. The water tank will have a capacity of 1,500 litres, so there should be enough water for everyone. It will be installed tonight, 18 January, and filled with water tomorrow morning.

We will remind you that during last years on the holiday of Epiphany 19 January (Eastern calendar), the citywide consecration of water took place in Lviv. Priests of all Christian denominations of the city took part in the consecration, Lviv choirs sang carols on Rynok Square, and there was a citywide ecumenical prayer service.