A Festival of Plucking and Singing, Created by Philharmonic Organist

14:10 05 August 2021
Tweet
452 0
The festival Pizzicato e Cantabile has been held annually for 6 years without pause, even during the pandemic period. Its founder and constant organiser is Olena Matseliukh – a prominent organist and solo player at the Lviv National Philharmonic on Tchaikovsky Street. It continues at the Lviv Philharmonic through Sunday 8 August: Here’s the story of the festival. By Vitalii Holich. 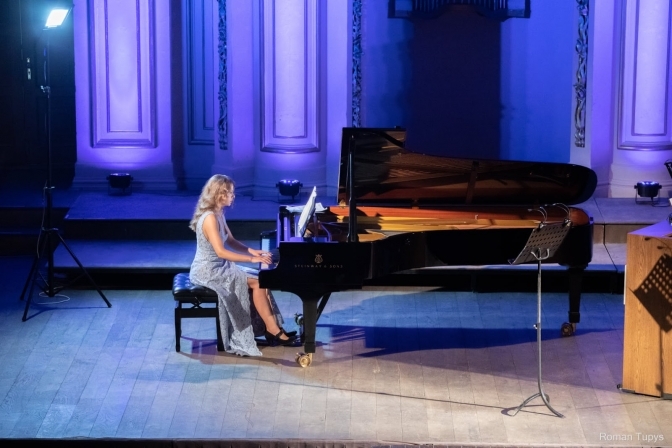 Melania Makarevych plays the piano at the 31 July concert, «The Silence of the Bell Mirror,» featuring the music of Arvo Part at the festival Pizzicato e Cantabile. Photo by: Роман Tupysʹ

Organist Olena Matseliukh approached the Lviv Philarmonic’s manager Volodymyr Syvokhip to organize more summer concerts for talented musicians who wished to continue playing instead of going abroad to rest or merely sitting at home. He accepted the idea enthusiastically and suggested to double the number of concerts and to combine these in a separate summer festival. They called it «Pizzicato e Cantabile,» to illustrate the main playing techniques used by the participants.

PIzzicato means to pluck the strings of a violin or other stringed instrument with one’s finger; while cantabile means singing that is smooth and flowing.

«Pizzicato from Italian means to pinch, and cantabile means to sing… For instance, the organ is singing, bandura is pinched, tsymbaly [Ukrainian version of dulcimer] is also pinched – just to make it a bit unusual» – Olena Matseliukh describes her idea.

Starting as the event primarily for local talents, Pizzicato e Cantabile expanded to a festival where musicians from the whole of Ukraine and from abroad have been performing, maintaining the classical tone of the summer in Lviv. The number of concerts grew from three at the beginning to eleven this year. 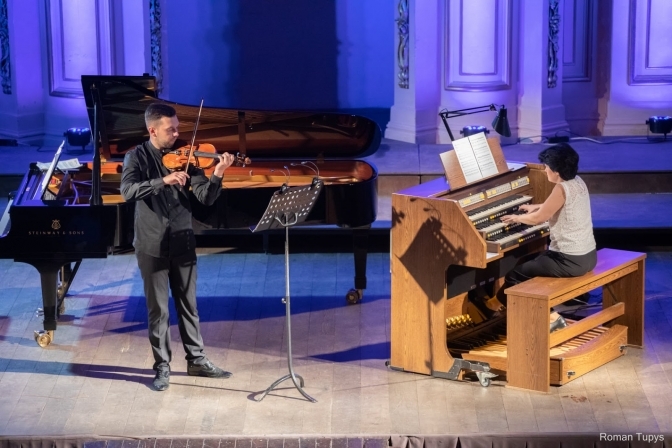 Igor Muravyov plays the violin and Olena Matselyukh the organ during «The Silence of Bell Mirror,» with the music of Arvo Part. Photo by: Роман Tupysʹ

«Now, there’s no need even to seek the participants. People approach us themselves asking to take part in our summer festival. Initially, we were doing it with our own forces, then with our partners from Kyiv. After that, foreigners started to join us. We were visited by musicians from six or seven countries: USA, Croatia, Poland... Especially, we are cooperating with the Czech embassy. Every year, they present us a musician performing on piano, organ, or harpsichord» – says Olena Matseliukh.

This year’s selections include, with listening links to Spotify:

– Music of Broadway and Hollywood

– The music of Vivaldi, Ediaf Piaf, and others--all played with the Ukrainian bandura instrument

– Evening of «French impressions» including Ravel and Debussy

You can find a playlist with a sampling of the festival’s composers here.

You can see the 2021 festival schedule at our weekly Music List (scroll to Lviv National Philharmonia) and you can buy tickets in person (Google Maps location) or at the Philharmonic’s website. It continues in the comfortable arm-chair setting of the Philharmonic’s Lyudkevich Concert Hall on Tchaikovsky Street until Sunday 8 August.

You can watch clips of performances at the festival’s Facebook page.