18:25 10 October 2021
Tweet
765 0
«You could be really good [at what you do] but you have to let people know how good you are»: Model and dietician Maye Musk shared ideas about self-promotion, self-determination, and nutrition in keynote remarks to Lviv’s annual tech festival. 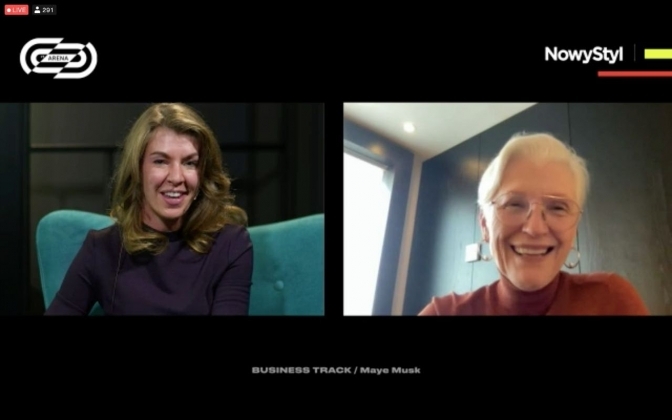 «If you know you’re good at something, make sure you find people who appreciate you,» Maye Musk, mother of visionary entrepreneur Elon and two others, said in the keynote remarks of Lviv’s eighth annual IT Arena tech conference.

Speaking by video Friday 8 October from a Berlin airport, Musk discussed the struggles of her early career in South Africa and Canada, where she worked as a model and dietitian while raising three children. Answering questions from interviewer Laura Galante, an American cybersecurity expert, Musk focused on the need to promote yourself, especially, she said, when one is shy.

«Every tweet you do and every post you do is a risk because you could offend someone, but you have to promote yourself,» she said. «You could be really good [at what you do] but you have to let people know how good you are. You need to express your expertise and get a weird following and [then] people will come to you.

On Twitter, Musk has more than 320,00 followers; on Instagram, more than 478,000. The superfame of her eldest son might help: With more than 60 million Twitter followers, Elon, the founder of SpaceX and Tesla, could be considered a master of Twitter: his Tweets can affect stocks, attitudes, and behaviors globally.

Though she had been a model throughout her life, it wasn’t until a few years ago, in her 60s, when she posted photos on Facebook that people saw her as a supermodel. New York Fashion Week invited her to a runway show, and she appeared in a Beyonce music video and on magazine covers..

«It was really hard for me as a scientist» – she has two master’s degrees, including from the University of Toronto» – to put my photos as a model on instagram, but as you see I got over that,» she said, smiling. « I try to boast with a sense of humor. When you’re in your 70s it’s easier to boast.»

Her social media advice was specific: «Follow the top people in the profession you want to be. You can comment and your brilliance will be found.» Avoid TikTok, she said – it’s too entertaining and time-wasting–»but you have to figure [these] things out for yourself. You learn all the time. Study everything in your profession.»

«Instagram for photos [but] Twitter is great to get your expertise out. Don’t give it all away because you want to sell your brain. … And now Twitter gives me the book sales and publishing as well as the talks.» 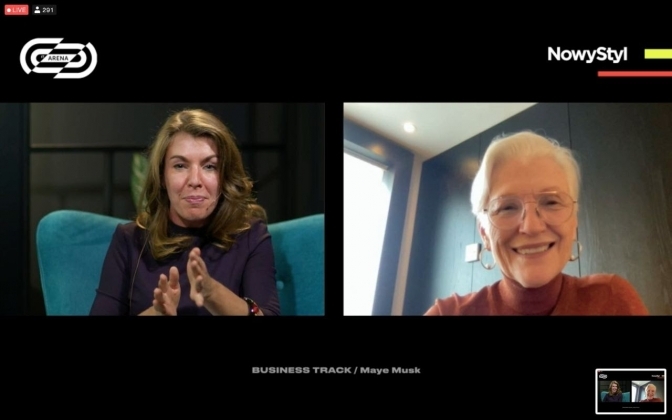 Maye, 73, is also a credentialed and experienced dietician.

«I watch everything I eat,» she told Galante. «If i over-eat one night, I will eat perfectly for three days until [balance is restored].»

She said had been a plus-size model in her 30s before she realized that the root cause of disease is poor diet.

«I find that people are ignoring science because they have their belief,» she said. «They believe they should go gluten-free or they should eat lots of kale every day. I don’t do either. I follow a flexitarian diet: the basics of eating well. It’s vegetarian at home, because I’m a bad cook. … When I eat out I will have meat, fish, or chicken. Usually the portion sizes are too large in New York, where I live, [so] I will take two-thirds of it home with me and I will have meat for a few days.»

«And protein powders! Why don’t you just eat food?!»

Galante asked if Musk liked Ukrainian food, with a preponderance of local vegetables and fruits.

«I came to Kyiv for three days of Marie Clare [conference] three or four years ago [2017]. I ate so well. I had the best time, and I met the most wonderful people.»

She told the audience there are four categories of diet to consider: Mediterranean, flexitarian, WW, and dash.

The author of A Woman Makes a Plan: Advice for a Lifetime of Adventure, Beauty, and Success, Musk is a twin and one of five children. In the 1960s, their adventurous parents flew the family around the world on a prop plane while also looking for the «Lost City of Kalahari.

«You dont live without fear,» she said, then calling a saying of her father: «‘live dangerously, carefully.’«

«If you aren’t happy, you have to make a plan,» she said, after talking with Galante about the struggles of immigrating to Canada and raising three children on her own. «You really have to get out of it. When you do move on, you’re scared, you have no confidence because you were in a situation when your confidence was drained and you were so miserable and [now must] move ahead.»

When she first moved to Toronto with her children, she said she couldn’t go on dates. Unlike in South Africa, men and women tended to split the check in Canada, so if she went on a date, her kids couldn’t eat.

Her other children are Tosca, a filmmaker; and Kimbal, a restaurateur, chef, entrepreneur, and sometimes business partner of Elon. Her talk was titled, «Keeping an indomitable spirit across borders, ages, and industries.» Interview Laura Galante, an American in Ukraine, had earlier given an IT Arena talk on cybersecurity; you can read a summary here from Lviv Now: «US Cybersecurity Expert: Focus on Resilience, not Strength»