How Ukraine’s Uklon Took On Uber Dmitry Dubrovskiy in the studio speaks to the IT Arena audience

Becoming the national champion in the market of ride-hailing apps – this was the continuous aim of Uklon, according to its CEO and co-founder Dmitry Dubrovskiy in remarks he gave 8 October at Lviv’s 8th annual IT Arena tech festival.

In 2009, the company emerged on the basis of Evos, which was a typical example of a traditional taxi service in Ukraine. Initially, the idea was to create a new company that would inherit the already existing market of the old one, but the analysis of users’ attitudes showed that such an initiative wouldn’t have enough support. Instead, an online platform for taxi orders was started – before Uber’s beta launch, offering a completely new type of service to the residents of Ukrainian cities.

At that time, the innovation of such an idea was best realised when comparing to the existing alternatives: the long and complicated process of seeking drivers through the dispatcher’s centres and the poor condition of vehicles provided by taxi companies – these were the main targets which Uklon planned to improve.

However, Dubrovskiy believes, they wasted the first five years of the company’s life. After developing the application and gaining an initial audience in 2010, Uklon’s pace slowed in the next years. In 2012, the company Bolt was started in the Estonian capital Tallinn, following Uklon’s model and deploying around eastern Europe and Eurasia. Four years after that, Uber, which by then was the global leader in online mobility, entered the Ukrainian market, becoming a threat to Uklon.

Dubrovskiy named several of Uber’s «punches» that hit Uklon hard at the very beginning. The American startup refused to cooperate with traditional taxi companies (unlike Uklon) and denied any supply from them. Uber also launched a strong marketing campaign involving famous politicians like Kyiv mayor and heavyweight boxer Vitalii Klytschko.

Furthermore, the media started writing about Uber, thus advertising it for free, while Uklon promoted its brand at its own cost, and in general, didn’t care much about marketing at that time. In addition, the American competitor set up quite attractive incentives for drivers, for instance, paying drivers for merely staying online in the app, and they launched new services, like Car Fleets, reimagining the idea of a local taxi company. As a result, these steps helped Uber capture one-third of the Kyiv market during the first half of the year.

Uklon’s response: evolution of the company

The first step was to stop keeping both platforms, as Uklon still maintained the taxi service Evos. So the team directed all investments to Uklon and invited the top management from the old company. Then, on Uber’s example, the Ukrainian platform stopped collaborating with taxi companies and began to communicate with drivers directly, starting its own call centre.

Uklon invested heavily in product development: renewed the functionality of their application, left only the most useful features in it, and compiled them with the best practices of the foreign competitors. For instance, their data team developed surge pricing after it had discovered this feature in Uber, which meant the regulation of the price depending on traffic, weather, and other related factors. However, unlike the competitor, Uklon only set the recommended price so that drivers could approve or deny it. This innovation became extremely popular, and the company even decided to advertise it on TV.

Up to now, Uklon’s team increased five times to sustain the competition. The candidates were selected according to the same set of values, as the team understood the importance of maintaining the corporate culture.

Nevertheless, Uklon suddenly realised the problem: candidates perceived them more as a taxi service than an IT company, though the management considered themselves having all the needed features of the latter. A year ago, as part of the company’s 11th anniversary celebration, Uklon launched an advertising campaign to promote its IT image.

Along with the mentioned steps, Uklon started investing more in marketing. It enhanced its PR department and started collaborating with young Tik-tokkers and Insta-bloggers. With these strategies, they grew twice, if compared to 2009. New features were heavily promoted, like the «Safety patrol» which enabled users to create a black list of disliked drivers and use a SOS button in emergency cases during the ride.

Importantly, a turning point for the company’s success was the establishment of quarantine restrictions by the government in spring 2020. They impacted all the taxi and ride-hailing platforms, but after that, Uklon managed to surpass Uber and Bolt and become first on the Ukrainian market. 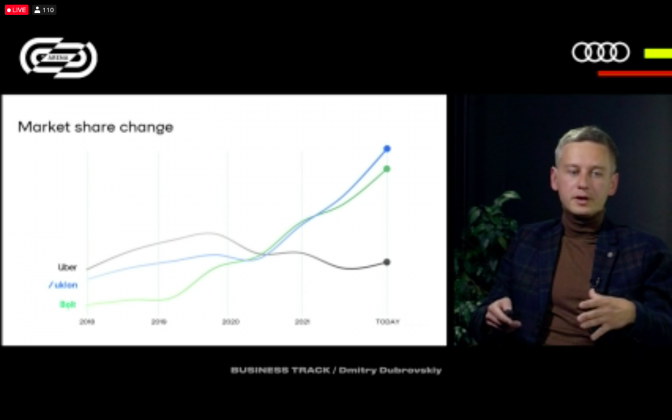 Given this experience, Dmitry Dubrovskiy says they are not afraid of any other «goliaths» who may appear in Ukraine, namely the Chinese car-sharing service Didi. At the same time, it’s harder to compete with some local services, like Ontaxi, which has firmly established its first position in the Kharkiv region’s market.

As for now, the company sustains with its own funds, as investors often depreciate businesses focused on the Ukrainian market due to corruption, war, and low income of the citizens here. Uklon has definite plans to expand on an international scale, which is the demand of some investors, and prepares for entering two other countries, though their names are still a secret.

You can learn more at the IT Arena website.

«Do Not Put Humans in a Robots Job». Ten Rules Google Follows.