Why Does Russia Need Ukrainian Ex-Cops Accused of Killing Civilians? 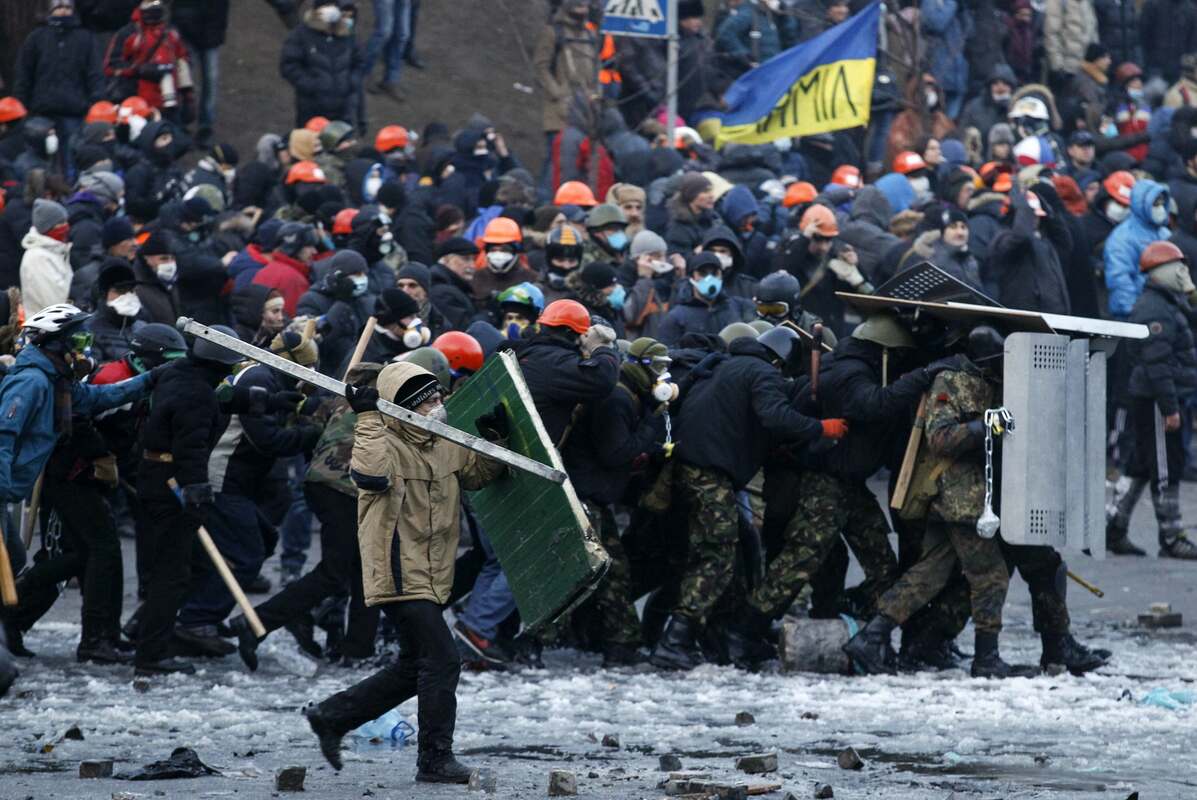 Ukrainian President Volodymyr Zelensky described Sunday’s prisoner exchange with Russia as a vita step toward peace after six years of brutal fighting between Ukraine and separatist forces in the Donbas region. But some Ukrainians took to the streets in anger at their government for releasing three Ukrainians accused of murdering unarmed civilians during the 2014 Euromaidan protests. Russia has long sought the liberty of these former officers of Berkut, the disbanded Ukrainian special police force. Why, skeptics wonder, if Russia is as innocent as it claims of meddling in Ukraine, does it want the release of former Ukrainian officials accused of murdering their unarmed countrymen?

Those three ex-Berkut officials – Oleh Yanishevsky, Serhiy Zinchenko, and Pavlo Abroskin – have maintained their innocence during more than five years of detention. But Saturday at the request of prosecutors appointed by the first-year government of President Volodymyr Zelensky, the Kyiv Court of Appeals released the men on personal recognizance Saturday in time for the prisoner swap.

The ex-Berkut officers still stand accused of murder and other offenses. But now that they have crossed into breakaway Donbas, they have no reason to face the court again. Russia claims that it has nothing to do with the Donbas separatists who have been waging battles against Ukraine for nearly six years, though Russian military equipment abounds in the region and has been used against the Ukrainian military. Russia further claims it had nothing to do with efforts to stop Euromaidan, which was a critical moment that shifted Ukraine toward the west and toward its own cultural and economic resurgence – and away from the Russian sphere of influence.

Yet the Putin administration has offered Russian citizenship to Berkut officers accused of Euromaidan crimes, and it has long argued for their release into pro-Russia territory, almost as though Berkut was a Russian and not a Ukrainian agency. Ukraine until now has refused, saying that Euromaidan crimes and the war in Donbas are unrelated – unless of course they are part of some grand Russian plan. During Donbas prisoner exchange negotiations with Russia in 2017, officials under then-Ukrainian president Petro Poroshenko rejected requests to release any ex-Berkut officers.

«Our position is such that we should not release those people who have no relation to the events of this undeclared war [in the Donbas],» – said Yuriy Tandit in 2017 as reported by UA wire. At the time Tandit was advisor to the head of the Security Service of Ukraine; he resigned in 2018 for reasons unspecified.

And so the Berkut defendants remained in custody. But for reasons as yet unverified, their cases moved at a Kafka-like pace: never-ending. Indeed, the prosecution of alleged crimes against Euromaidan protesters has been slow and unsuccessful. Since 2014, Ukrainian prosecutors have brought more than 288 Euromaidan cases to the courts. Sentences have been passed only in 48 of those, only nine of which mandated imprisonment. But not a single Berkut official has been convicted, despite the unit’s now-documented central role in attempts to stop Euromaidan. The administration of President Viktor Yanukovych sought to increased the Berkut from 5,000 to 30,000 to rid the public square of the protestors. But Yanukovych fled to Russia. The new government dissolved the special police and levied charges against many of its officers.

Serhiy Dyachuk, who has been and still is the presiding judge at the Berkut trial, warned in 2017 that forces he could not name were trying to prolong the trial to the benefit of the defendants. On several occasions, flash mobs took over the courtroom. Rumors of Russian influence – a common situation worldwide – swirled.

Then in Spring 2019, Ukrainians elected a new president, and with him a new governing party in parliament, that pledged to clean up corruption, make government more effective, stand for a free Ukraine, and to put an end, somehow, someway, to the strife in Donbas. Among the things to clean up were outstanding matters from 2014. Amnesty International and others had criticized Ukraine for not moving swiftly enough to punish officials from

Berkut who attacked the protesters. In October Ruslan Riaboshapka, President Zelensky’s prosecutor general, promised to speed up inquiries into the alleged misdeeds of the ex-Berkut officers. (In 2017, under the previous administration, and seemingly frustrated with slow-moving anti-corruption efforts, Riaboshapka resigned as a member of the National Agency for Corruption Prevention).

As part of his promise to ease tension with Russia and make peace in the violent Donbas region, Zelensky met Russia president Vladimir Putin December 9 for negotiations in Paris alongside French leader Emmanuel Macron and German chancellor Angela Merkel. But the prisoner-exchange lists were not hashed out until last week in Minsk, Belarus.

Suddenly on 27 December, Riaboshapka, the prosecutor general, appointed new trial prosecutors and the government’s tune changed: after some five years of detention, the three detained Berkut officers, the government said, should be released on personal recognizance while the trial continued. Hours later, they were freemen among the anti- Ukrainian separatists in Donbas. In return for those officers and 124 other individuals, Ukraine received 76 of its own, including a few correspondents for the U.S.-funded Radio Liberty.

Which brings up an elephant in the room. Where has the United States, a long-time Ukrainiain ally, been in these negotiations? In the past few months, Ukraine has not had the overt and strategic high-level assistance of the U.S., beyond funding. Reporting on Sunday’s swap, the New York Times alleges that US officials were too distracted to assist in the Paris talks, occupied by Democrats impeachment of President Trump, perhaps ironically, for what they allege is his endangering of Ukrainian interests. The U.S. Secretary of State has recalled the acting U.S. ambassador to Ukraine a few weeks in advance of the expiration of his term. And White House officials seem jumpy about anything to do with Ukraine at the moment, at least out in the open. Moreover, Ukrainian prosecutors are at the heart of allegations involving President Trump, former vice president and current presidential Joseph Biden, and Biden's son Hunter, which makes the whole story complicated and even hazardous.

Meanwhile due to heightened tensions with Iran, U.S. Secretary of State Mike Pompeo has delayed a trip to Ukraine that was scheduled for the first week of January.

Joe Lindsley is an American writer. He is the former editor-in-chief of two weekly newspapers in New York State, and he was once protégé to Fox News founder Roger Ailes. He is portrayed by actor Emory Cohen in the 2019 Showtime series The Loudest Voice, starring Russell Crowe and Siena Miller. He has also served as manager of a Celtic-Ukrainian folk rock band. You can follow him on Instagram @jplindsley

Author's column is a reflection of the subjective position of the author. The editorial office of Tvoe Misto does not
always share the opinions expressed in the columns and is ready to give the dissenters an opportunity for a reasoned reply.