«All the People Necessary for Happiness.» Lviv Stories

19:52 02 October 2021
Tweet
665 0
Amid a strange symphony of sights and sounds, Americans and Ukrainians talk about life while standing in a river and walking in a forest. 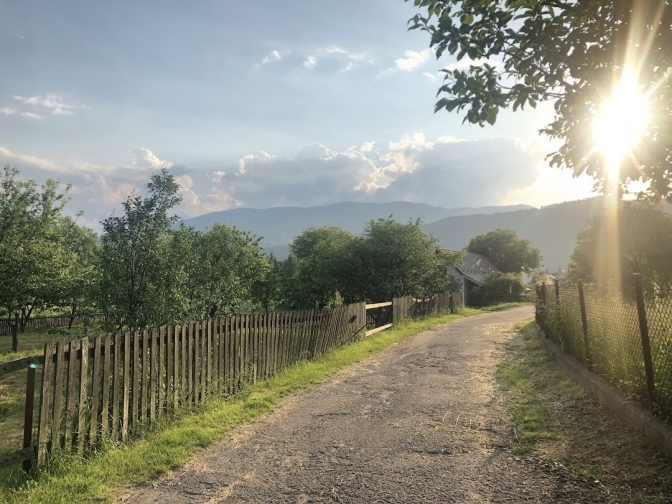 A road in Skole, Ukraine.

Skole – Motions, images, and sounds besieged my mind. I smelled trees of apple, pear, and cherry. I felt the hot sun. I heard a choir in a churchyard singing the melodious «mnohaya lita» (многая літа) or «many years», I heard dogs barking. I saw two geese mating. And then the strangest thing of all: Surrounding me in this eastern European village tucked amid green mountains were a half dozen friends from Lviv, Ukraine, and also from New Orleans, USA, people from my pandemic life and my pre-pandemic life.

It was as in a dream when people from different parts of your life assemble. My mind lost the tether to reality. Where was I? Was this real?

«Does that hat give you power?» asked Bohdan, one of our group. He was referring to the colorful hat of the Hutsul people I wear whenever I leave the city for the mountains. I passed the hat to him, as I started to falter. Power was fleeing. The choir, the dogs, the geese, the trees.

«I think it gives me power,» I said but as I spoke I heard my own voice as if from outside: dissociation. My friends Mike and Lucinda from New Orleans walked up to me to see what was the matter as I leaned against a fence. Whoa! What were they doing here? How did they, too, end up in Ukraine?

I had brought these people here, via train, to see the Zarinok in Skole. In lower case, «zarinok» means the land alongside a river. In Skole «the Zarinok» is the result of quarantine project of Volodymyr Kebalo and colleagues who cleaned up the riverbanks. They made a place both stunning and calm, where goats cut the grass, you can hit a golf ball, have a picnic, fish, swim, or, as I was evidently doing, contemplate existence amid psychedelic colors. 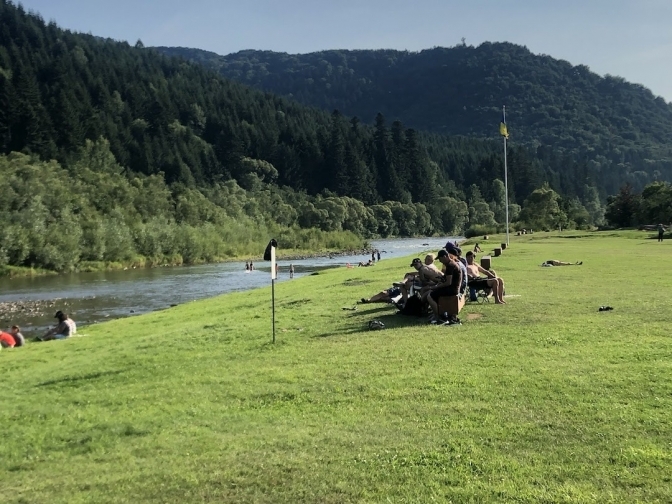 Despite my confusion, I steadied on and led this crew of friends to the magical Zarinok, with the most diverse and vibrant collection of green I’ve seen, ever, including in Ireland. While they set up camp and the bbq pit, I rolled up my pants and entered the shallow but flowing River Opir (Resistance) immediately. 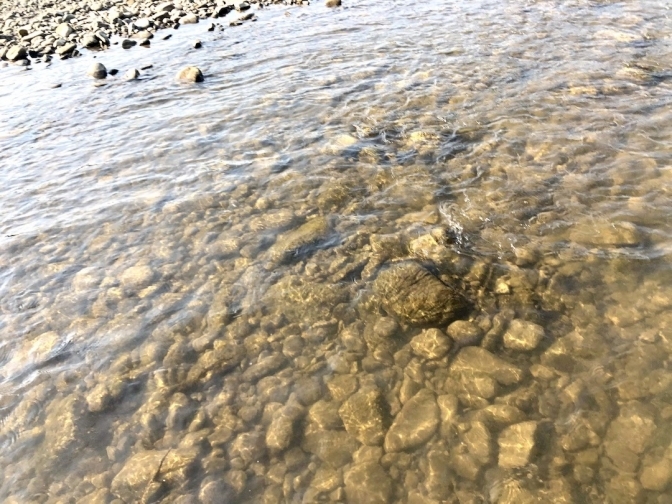 I looked at the mountains of multiplying shades of green. I felt the cold water. I listened to the current on the rocks. My mind and body reunited. I reviewed memories from the preceding night: Penny the American had thrown a party at her Lviv flat. My old friend Mike, a chef from New Orleans, visiting with his new bride, Lucinda, had searched the local bazaars and markets and had cooked up some proper gumbo – deep, mysterious, soul-stirring; Louisiana’s borsch, you could say.

Penny served some high-class wine and everyone, Ukrainian and American, told stories while we listened to Chet Baker and Django Reinhardt, a playlist curated by Lviv jazz friends who had joined us. 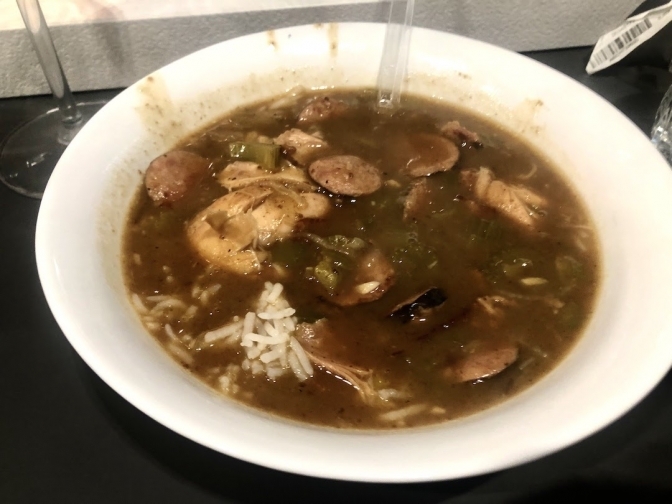 I had audaciously declared myself tamada, the role of toastmaster in the Republic of Georgia. The tamada either makes or asks others to make toasts, each one on a specific theme: God, ancestors, parents, friends, brothers and sisters, life, strangers, etc. The requirement: Everyone had to use a verb, to reveal with no shadows what was on their hearts.

Near the end of the night, amid the great conviviality, Mike had said, «I want to toast everyone here, because here we have at this moment all the people necessary for happiness.»

Nearly everyone from the party had agreed to travel to Skole the next morning.

Just then, Mike entered the river and waded over to me. I hadn’t seen my friend in three years, when I left New Orleans and began traveling the world. Traveling Europe, he and Lucinda had found me in Ukraine.

«I’ve been reading George Orwell’s Down and Out in London and Paris,» Mike said. «Orwell says that with other friends who worked in restaurants, they would, when they received their paychecks, drink all night, maybe starting with champagne and everything was great. But as the night went on they had just drunk too much and he was depressed. What was it all for?»

«Did he see any good in those moments?» I asked, thinking of the party the night before.

«Maybe Orwell was wrong,» I said. «Or maybe he was in the wrong place or with the wrong people.»

«I do believe it,» Mike said, speaking slowly and scanning the view of the water and mountains around us. «The finite nature of such moments doesn’t mean they are worthless. There might always be a subtle sense of oblivion hovering around us but we can hammer away at it. Keep the light, hold onto it, be in the present and try to remember it.»

I noticed, and chose to record in my mind, the river washing its way past my feet, cooling and swift. The current was a steady flow and yet it also seemed to be an infinite set of finite washings. 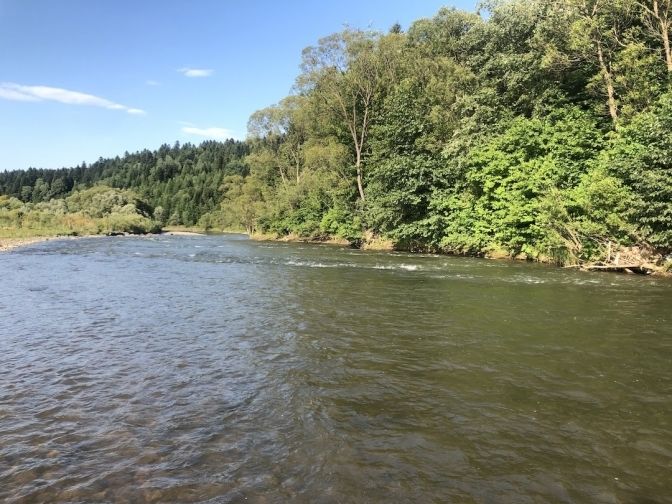 «I don’t want to leave this amazing spot,» Mike said. They were flying to France in a few days. «And yet yesterday I didn’t even know it existed. But even though I will miss it, I am glad I have seen it.»

«I want to show everyone the forest across this water,» I said, pointing to the green mountain that rose from the opposite shore. Assembling some of our crew we walked the winding, garden-laden lanes of the village. Over a bridge we passed a Boyko music festival. A choir of young girls in traditional dress sang folk songs, adding to the magical realism feeling of the day. 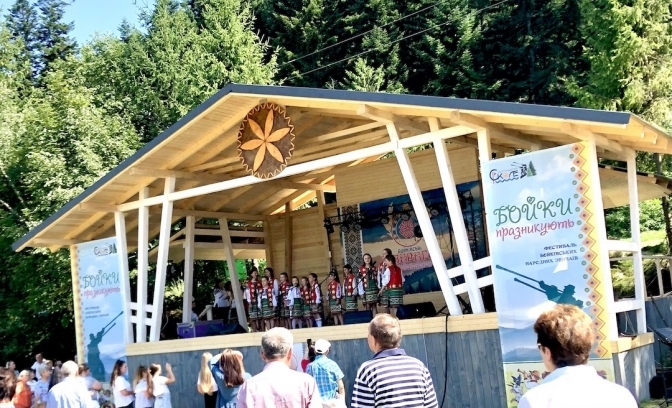 In the cool forest alongside a roaring stream we reached the rust-water spring (джерело / dzherelo) and drank its strong produce. A little ways up the trail we found walking sticks and climbed up the slope into the pine forest: a clean floor under tall trees.

We were quiet, not talking, going off on our ways: scrambling further up the slope amid the towering pines, throughout the spacious fresh forest floor.

«There’s a ritual I always have to do in the forest,» I said. «There’s a director from Soviet times,»–Parajanov–»an Armenian born in Tbilisi. He made a film set in the Carpathian forests, with a magical swirling of trees and churchyard choirs and emotions, evocative of what I felt this morning. The main character is looking for his lost love amid the trees and he cries out her name--»

No one else wanted to join this yelling ritual. But Lucinda had noticed something and cried out.

They were little tiny white ones. Suddenly, we began to see them everywhere. Had they just grown? We were without a mushroom expert, so we did not pick them. Every now and then a dead tree fell: Ruslan, son of our friend Taras, was shaking and pushing small dead trees until they made their final fall. 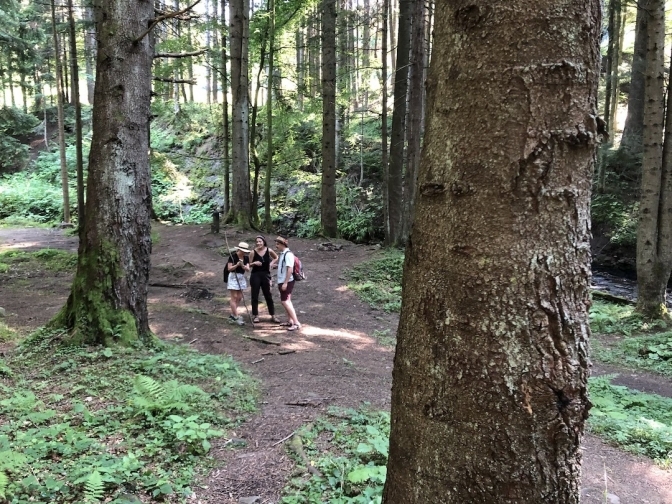 We followed Lucinda, who had authority now because she had found mushrooms, down a steep pine-needled route. Then we heard Chet Baker singer.

«Whoa! What’s that?» said Julie, before realizing it came from her phone, which within her backpack had somehow started playing a Chet Baker tune on Spotify.

Two other friends found us, as we returned to the path. 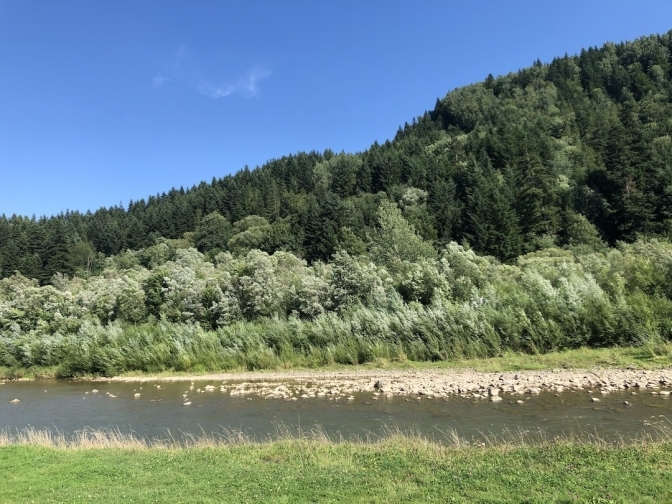 «This forest was once full of good witches and bad witches,» said Tetiana, always adept at crafting some fairy tales.

«Who was more afraid of each other?» I asked, as we walked back to the psychedelic green of the Zarinok. «The good witches or the bad?»

«Ah the bad were more afraid.»

«I would think it would be the other way around.»

«No,» Tetiana said, «because the good witches can harness the power of nature. They’re on the same side as the trees and mushrooms and flowers. Nature is more powerful in the end than all weapons and evil in the world.» 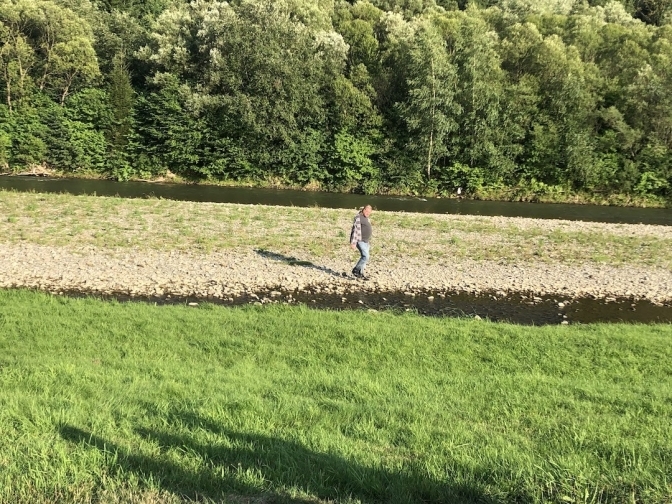 We returned to the Zarinok where we encountered additional friends from Lviv, who graciously shared with us some beer they had brought. We began our visit with lunch at the Vivcharyk hotel-restaurant–a fine place for varenyky (dumplings), mushroom soup and sauces, and what I call Ukrainian gnocchi. 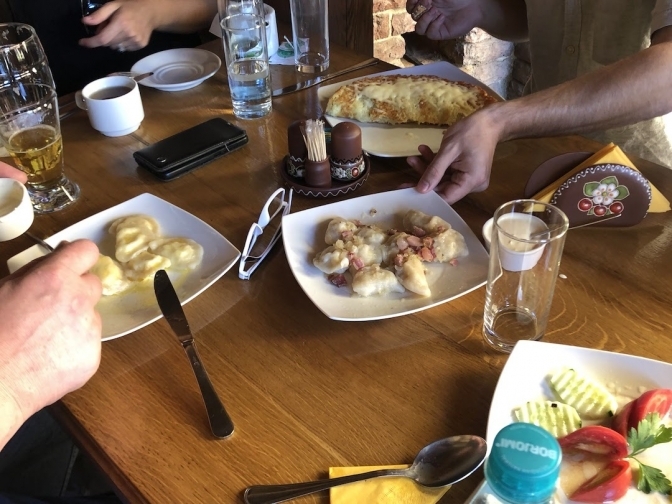 Here is the location of the Zarinok, here is the centuries-old wooden Panteleimon Church, and here is the entrance to the forest. Walk straight along the steam and you will reach a dirt path.

You can purchase train tickets here. For our 90 minute trip, we booked first-class compartments with a table and beds for comfort and peace. It is also possible to find drivers for your return home. Inquire at Vivcharyk.